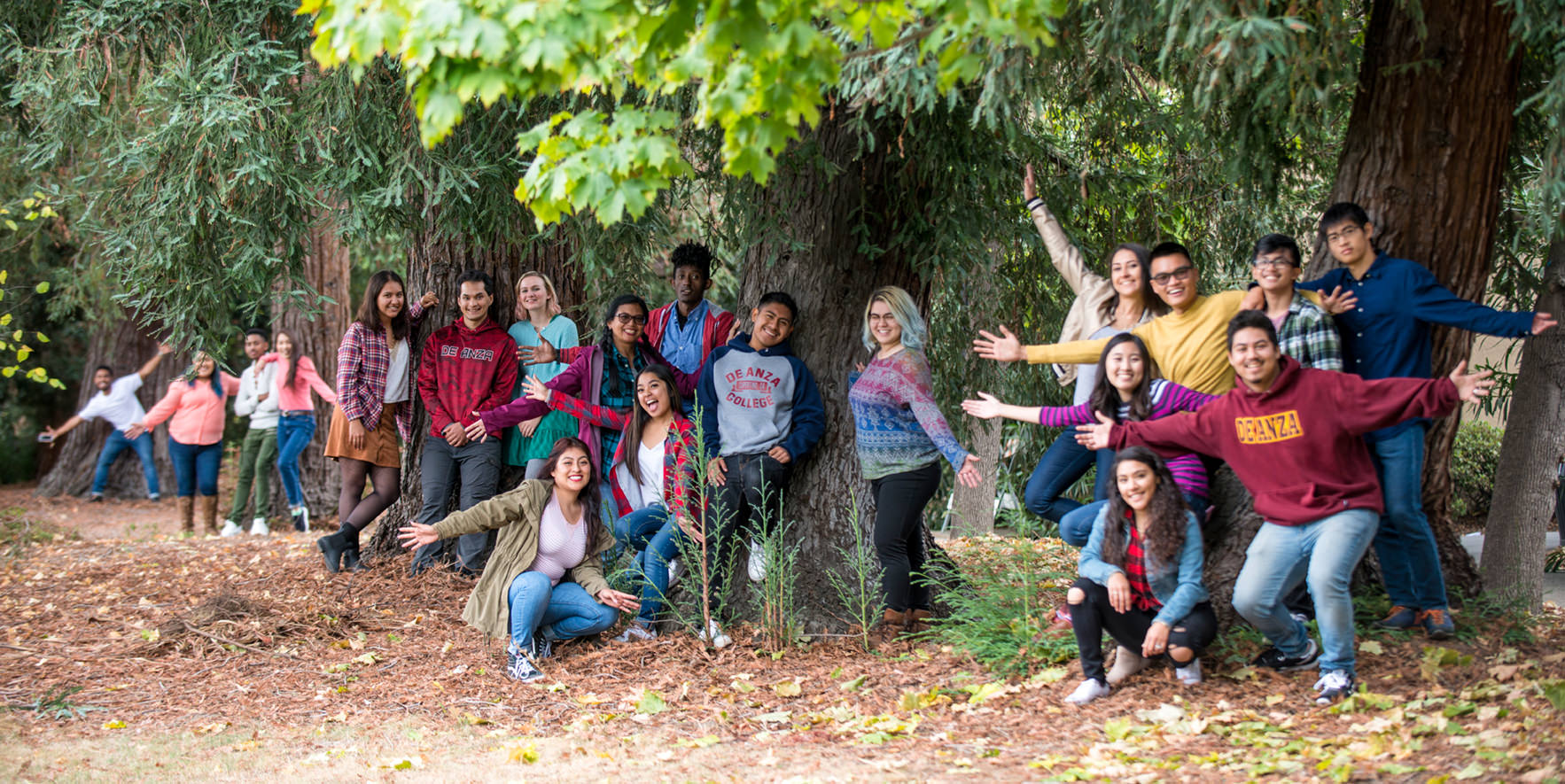 Sal Breiter’s enthusiasm for teaching is readily apparent in his Creative Minds class. He engages his students with jokes and anecdotes before launching a thoughtful discussion on the nature of intelligence and inspiration. He constantly moves around the room, so fired up about his subject that he can hardly stand still. 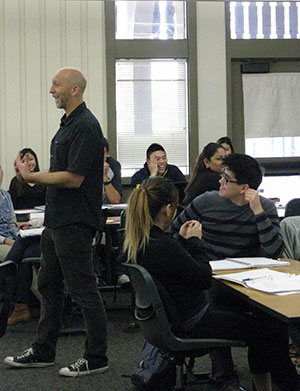 This is Breiter’s passion. He encourages students to embrace their humanity, find their own purpose and develop innovative ways to improve themselves and the world around them. He wants his students to keep moving and growing – to never stand still.

“It is my task to encourage students to identify the issues and problems that impact and matter to them the most, and to help them develop the skills to critically address them,” said Breiter. “This experiential process works best in an environment of warmth, love and support balanced with high expectations for scholarship and authenticity.”

Breiter has worked at De Anza for 13 years. He has a bachelor’s degree from Fairhaven College and a master’s degree from Western Washington University, both in anthropology with a focus on social justice and environmental sustainability. Breiter currently serves as chair of the Humanities Department, teaches in the First Year Experience program and regularly participates in the Equity Action Council. This winter, he is developing student civic engagement projects and collaborating with the Euphrat Museum on a public art project.

“I believe that human happiness and cultural innovation are rooted in the relationship between an individual seeking purpose and meaningfulness, and a community aspiring for social justice and ecological sustainability,” Breiter added.

When he is not teaching, Breiter is an avid surfer, artist, reader, walker and explorer of both the intellectual and physical worlds. He also strives to be a “fantastic father and husband.”

“Students are more likely to trust the learning environment, and their ability to succeed in it, if I model the attitude and spirit of genuine engagement in the discipline, and demonstrate sincere interest in and belief in their success,” said Breiter. “Part of this classroom spirit requires me to be myself always…so that I can unapologetically ask students to bring themselves fully into the classroom.”

Janet Takahashi first began working with individuals with learning disabilities in a summer educational program at Sonoma State Hospital. The discouraging conditions motivated her to enter the field of special education. She received a bachelor’s degree in psychology from Mills College and a master’s in special education from San Francisco State University. In 1974, Takahashi was hired to work in the Educational Diagnostic Center at De Anza, a pilot program to help adults with disabilities achieve academic goals at the community college level. 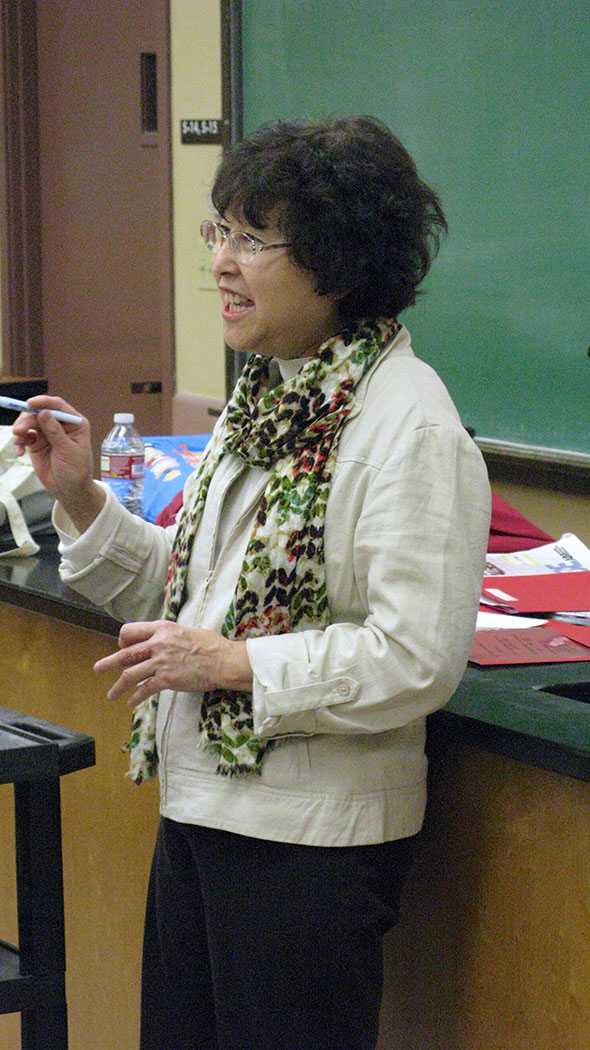 “At the time the whole premise of the program was controversial,” said Takahashi. “Since then research has proven that adults can change and learn at all stages of life.”

For 40 years, Takahashi has taught and advised students with disabilities in the EDC program. She currently teaches basic math skills in transition classes created to move students back into mainstream math classes. Her classes are diverse ethnically, culturally and in the range of disabilities.

“For those I have advised, it is always welcome news to hear they have found their way,” said Takahashi. “Some have contacted to tell me they have become surgeons, plumbers, homemakers, small-business owners and police officers.”

Takahashi has also been a part of many hiring and tenure committees. She participated in writing the original Asian/Pacific American Staff Association bylaws, and has twice taken over as the Executive Head of the EDC when a temporary replacement was needed. In the last several years, Takahashi has been the Disability Support Programs and Services representative on the campus Curriculum Committee.

“Teaching is a two-way dynamic process,” Takahashi said. “I only hope that I have taught my students as much about mathematics as they have taught me about courage, resourcefulness and persistence.”

In her free time, Takahashi participates in various campaigns for both bond measure initiatives and candidates supporting educational improvements. Several years ago, she and other EDC staff and students gathered 7,000 letters as part of a campaign to maintain categorical funding for community colleges. The staff personally delivered the letters to the State Capitol. Takahashi has also run for one of the delegate seats to attend the National Democratic Convention.

Throughout middle school and high school, Jesus “Chuy” Quintero was often labeled “at-risk.” It was a label that only served to further alienate him from other students. 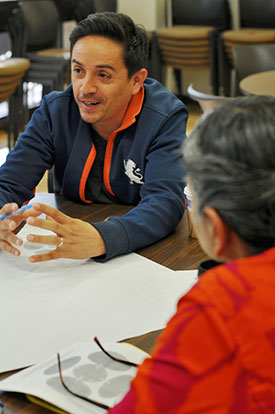 “I had already been placed outside of the margins by linguistic, economic and racial segregation,” said Quintero. "Latinos were implicitly labeled culturally backward in the schools I attended, which almost defeated me in my educational pursuits.”

But Quintero would not be defeated or marginalized. He earned bachelor’s degree and master’s degrees from San Francisco State University. He worked at Youth Uprising, a non-profit in East Oakland, and collaborated with Cal State East Bay to adapt conventional school models to meet the needs of historically oppressed youth. As the Outreach Coordinator for Youth Radio, Quintero worked with incarcerated youth to produce social and political commentaries. Through his work, Quintero gave a voice to groups that are often silent – or ignored.

“My pedagogy stems from a pressing desire to teach my students concepts that were never introduced to me as a student,” Quintero said. “Despite the obstacles we endure and the academic trauma left in its wake, there is still hope and potential.”

Quintero has been an English instructor at De Anza since 2007. He teaches many First Year Experience students and dedicates himself to helping them grow. Quintero knows from experience how school failures can manifest in destructive ways, and he is determined to undo the damage that can be inflicted on other “at-risk” students.

“There’s so much at stake beyond what happens in the classroom,” Quintero added. “It is very much worth the price to push for change, peace and opportunity.”